A few weeks after beating the superstars of Real Madrid in the Spanish Super Cup, Atlético Madrid triumphed again in last night’s derbí Madrileño. The architect behind the win was once again the brilliant Diego Simeone, despite him watching from the stands. The difference was once again Atlético’s defensive organisation which frustrated Real and helped earn the Rojiblancos another impressive and memorable win.

As usual, Atlético were set out quite low in their 4-4-2 shape. The front two, Mario Mandzukic and Raul Jimenez, started their pressing inside their own half, and always tried to work tight together with their midfield to ensure that Real were never allowed to dominate the midfield.

One of the most important parts of Atlético’s setup is the way their midfield work. They always stay close together, very narrow, to stop the opposition playing through the middle. They are happy to allow the opposition to play outside of the midfield and invite crosses, as their centre-backs Miranda and Godin are both excellent in the air.

Here we can see clearly how the whole team defends. They defend in three lines and shift over to the side where the ball is with the entire team. The tightness is incredible, not more than 30 meters from Mandzukic in line one to Godin and Miranda in line three. Here they have let Real play outside the midfield, before forcing them back. 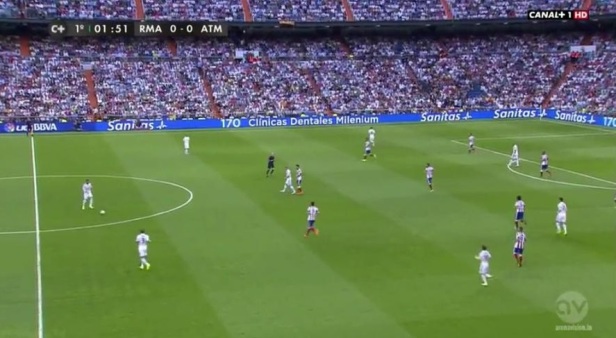 They are not worried about defending even deeper either. Here, almost the entire team is in the defensive third, but the organisation is brilliant and it is near impossible to play through them. In this picture there isn’t more then 20 metres between line one and line three.

At the start of the second half, not much has changed. The three lines are still intact, and the team is extremely compact. Real are forced wide, or will have to try a cross-field pass, and if so, by the time the ball reaches its target, Atlético will have shifted over to the other side.

In this picture, Real has managed to push Atlético deeper, but the tight and compact visitors keep Real out of the danger zones. Circled in blue is the front two, and while it may be unusual to see top teams defending this deep, they are very comfortable and they do it brilliantly. 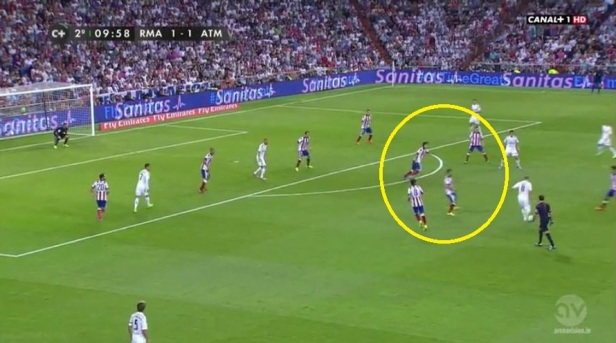 In this picture we can clearly see how tight the Atlético midfield is. It’s impossible for Kroos to find a pass centrally here, and he is forced wide, just like Atleti wants.

Dealing with Bale and Ronaldo

The two biggest stars in Real’s squad are the two most expensive players of all time, Gareth Bale and Cristiano Ronaldo. Two brilliant attackers, Bale played on the right last night with Ronaldo starting from the left. For the majority of the game, Atleti dealt with them in excellent fashion. Bale was completely nullified and subbed off in the second half after a quiet evening and Ronaldo was also handled relatively well, although he was arguably Real’s best player anyway. Ronaldo scored Real’s goal from the penalty spot after winning the penalty himself, he created five chances for his teammates, including a one-on-one with Atleti goalkeeper Moya for Karim Benzema and completed five of his take-ons. In the first half he was electric, but in the second Atleti dealt with him better and he didn’t have the same impact.
The plan seemed to be to “double up” against Bale and Ronaldo with the full-back and the wide midfielder, Juanfran and Raul Garcia on the right, Siqueira and Koke on the left. This worked very well, except for a period in the first half when the game was a little too open for Simeone’s liking and Real were given the opportunity to counter-attack and then Ronaldo in particular thrived.

Gareth Bale (circled in blue) receives the ball on the right and is instantly pressed by Guilherme Siqueira while Koke (both in yellow) supports his full-back. If Bale would have gotten away from the two, then Godin and Tiago are in positions to stop him too. 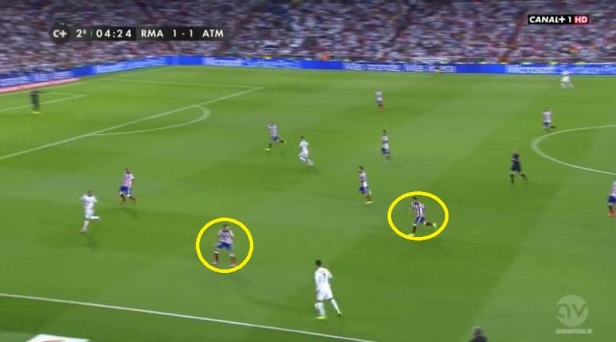 Here we can see the same thing on the opposite side, Juanfran and Raul Garcia doubling up on Ronaldo with Miranda and Gabi in covering positions.

This is where the problem occurred. Atlético lost the ball and Real countered, which puts Ronaldo in a great position. Tiago is the closest player and goes out to stop the Portuguese…

… but doesn’t have the necessary cover and Ronaldo easily skips past him before getting a shot away. Fortunately for Atleti, this effort went wide. 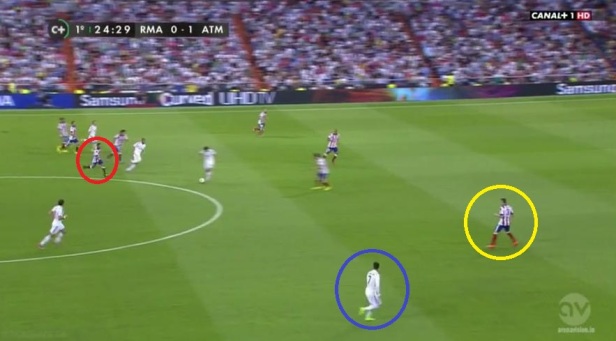 This is what happened before Real were awarded their penalty. Atleti have again lost the ball and Real counter-attacks at speed. Circled in red we see Koke, in blue Ronaldo and in yellow Siquiera. This is the problem that can occur when you play as tight with the midfield as Atleti does. Real isolates Ronaldo with Siquiera who is all on his own and Koke has a lot of ground to make up. 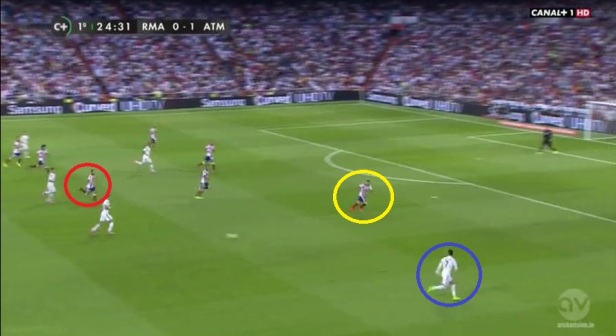 Koke is doing his best to help Siquiera, who tries to stay centrally as long as possible to prevent Ronaldo going inside. 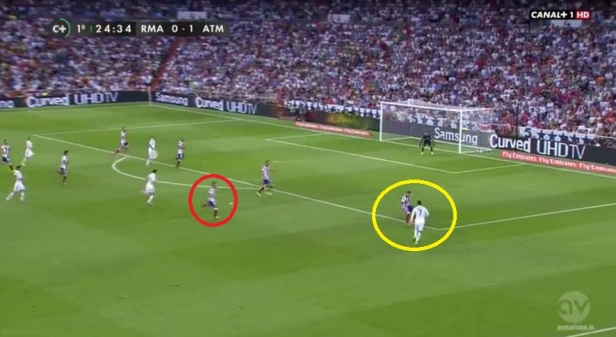 Koke has made a remarkable run but is still not close enough, and now Siquiera is one-on-one with a Ronaldo running at speed without any cover.

Now Koke is in the position he should be but it is too late. Ronaldo beats Siquiera who has to bring him down and concede a penalty. It’s great counter-attacking from Real, but an unnecessary goal to concede for Atleti after losing the ball in a bad position.

When talking about pressing, you often tend to focus on pressing high up the pitch to get the ball back as quickly as possible. However, Atlético Madrid is one of the most aggressively pressing teams in Europe despite defending very low. This aspect of their game is integral when defending low, to constantly make the other team work extremely hard to keep their attack going as the Atleti players will constantly put the opposition under pressure.

The following series will highlight one of the most common pressing triggers used. Circled in blue we have Toni Kross who is about to receive a pass from Sergio Ramos. The problem for Kroos is that he has his back towards the rest of the pitch and he doesn’t see anything behind him. Atleti captain Gabi (circled in yellow) recognises this, and sprints in to press the German. 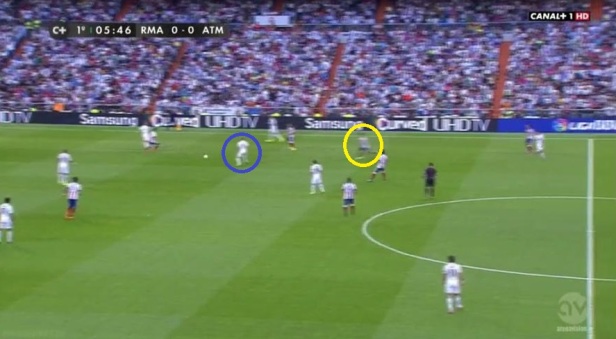 Now Kroos receives the ball, still with his back to Gabi, and will be instantly pressed.

Kroos has recognised the danger, and tries to get away. Look at the Atlético players, they are all ready to help out with Gabi’s pressing to win the ball back high. By contrast, look at the Real players. Modric looks disinterested and neither Ramos nor Coentrao does anything to help. No one gives him an option to pass the ball away from the danger. It’s easy to see which team was up for it. 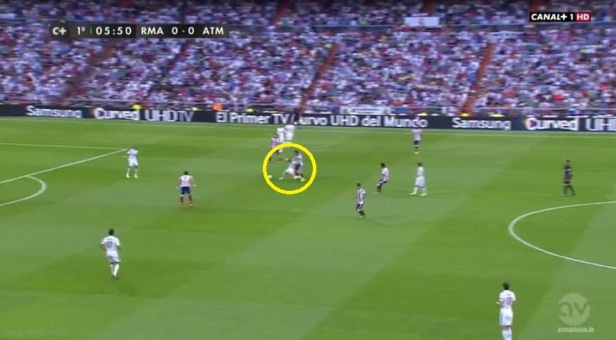 This time, Kroos and Real are let off the hook by the referee who gives the German a free-kick. If not, Gabi would have the option of playing either Mandzukic or Jimenez through on goal. An example of excellent aggressive pressing from Atlético.

This is an example of occasional high pressing. The ball is played back to Casillas and Mandzukic goes to press.

Casillas plays it wide and Jimenez continues the pressing while also blocking the possible pass into Pepe to play Real out of Atleti’s pressing. Mandzukic blocks the option of going back to Casillas and Koke blocks the pass to Arbeloa.

Modric has no other choice than to kick it long, and the ball was easily won in the air by Godin. Please notice Tiago’s position, he is about to cover the only other possible pass Modric could play, along the sideline to Bale. Again, another example of brilliant aggressive pressing from Simeone’s men.

In the second half, Arda Turan was brought on in place of Gabi, with Koke moving into the centre of midfield and Arda taking his position on the left, and later Griezmann was brought on in place of the largely anonymous Jimenez. What the substitutions meant was a threat on the counter-attack for Atleti, where they previously had struggled. They had spent the entire game defending but Arda gave them an outlet on the left as he could run with the ball and force Real to defend, which lead to Atleti enjoying a little more possession (by no means much). Griezmann brought some creativity to the attack, and also the attacking shape was altered a little, with the Frenchmen playing off Mandzukic rather than up front with him. 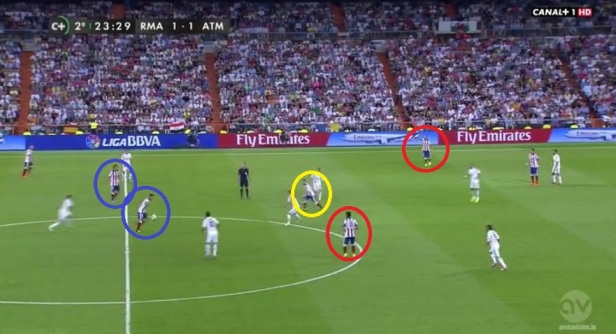 Griezmann is here circled in yellow with the two sitting midfielders Koke and Tiago in blue and Raul Garcia to the right and Arda Turan to the left in red. 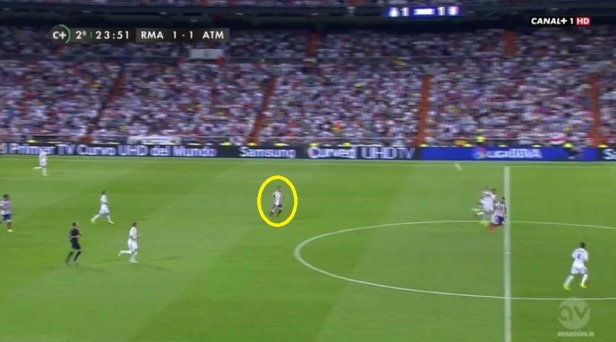 Again, here is Griezmann dropping off the Croatian number nine to find a position behind Real’s midfield. Griezmann performed a bright cameo, by creating two chances including one shot from Arda where he turned in midfield and played a great pass to the left where Arda skipped past Arbeloa to fire just wide.
A major part of Atleti’s attacking usually is the right-wing delivery from right-back Juanfran, but he had to focus on his defending and didn’t attack as much as he would have wanted. However, the winning goal came from one of his few attacking runs. Griezmann got away from Kroos in the middle before feeding Juanfran whose low cut-back cross was let go by Raul Garcia through his legs to Arda Turan who finished excellently.

Atlético Madrid continues to impress and is right now ruling the city of Madrid. Of the last four derbí Madrileño at Santiago Bernabeu, Atlético has now won three and is four points ahead of their rivals in the league. In fact, Atleti are unbeaten in eight league derby’s. Last night’s win came courtesy of excellent organized defending and two positive attacking substitutions. Real couldn’t break Atlético down and became frustrated as the game went on. The resilience of Atleti proved pivotal and the positive inclusions of Arda and Greizmann proved to be the difference. Despite Real having 63 % possession they only had two more shots on target than Atleti, who scored with both their attempts. Earlier this season Atleti won the Super Cup against Real and now they claimed the first league derbí of the season. Real might have the bigger names and more money, but Atleti is now the dominating side in Madrid.