Dortmund has started the Bundesliga season in terrific style with two 4-0 wins in the opening two league games. New Head Coach Thomas Tuchel has changed the playing style quite dramatically by placing a much larger emphasis on ball retention which has seen the team’s possession play improve massively. New signing Julian Weigl has been instrumental in the build-up play alongside with Mats Hummels and Ilkay Gündogan who both have returned to fitness and form. The main reason for the club’s improvement though is Tuchel’s well worked out system, as it’s evident a lot of work has been put into the build-up play on the training pitch.

While Jurgen Klopp’s Dortmund would also try to build play from the back they also played a much more direct game than Tuchel’s side. Notably, Tuchel doesn’t want possession just for the sake of it however, but wants purposeful possession. This comes naturally to the squad with the likes of Pierre-Emerick Aubameyang, Marco Reus and Henrikh Mkhitaryan all having both the speed and willingness to pose a threat in behind.
In terms of formations, BvB switch seamlessly in game between a 4-2-3-1 with Weigl and Gündogan as the pivots and Shinji Kagawa as the number 10 and a 4-1-4-1 where Weigl act as a single pivot behind the other two. When defending they utilise the 4-2-3-1 and press high, but in this article we focus on the way they build their possession through the thirds of the pitch.

For starters, Dortmund split their two centre-backs (circled in yellow) really wide as seen above, and encourage Weigl to drop in between them to get on the ball. The full-backs push up really high and stretch the opposition horizontally as well as the forwards, Aubameyang in particular, stretching the opposition vertically.

Again, Hummels and Subotic while to goalkeeper Roman Bürki is on the ball and opens up the space for Weigl to drop in to as seen below (Weigl circled in blue). Weigl understanding of when to drop seems excellent and he has been perhaps the most important player in the build-play so far. 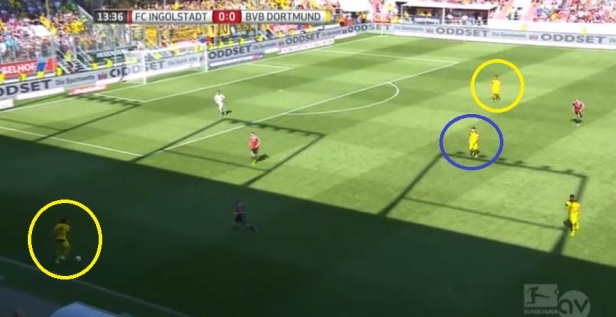 Hummels, Gündogan and the half-space

When having progressed further up the pitch, the right-sided centre-back move in more centrally while Hummels stay wider on the left. With both full-backs high and wide, this opens up space outside Sokratis/Subotic to go and get the ball for Gündogan. This position, in the half-space as some like to call it, is very hard to press and so the German midfielder finds himself with both space and time. This way of overloading the right allow Dortmund to quickly switch the play to Hummels who will have lots of space to play his through balls through the linnes of the opposition. It can be argued Hummels is actually the main playmaker in the team. His ability to find the right pass to split a team, or play it over them with quality is very underrated and he is probably the outstanding ball-playing centre-back around. This switch is something Dortmund use very often and it’s been effective thus far, for example leading to the first two goals against Mönchengladbach.

Gündogan (blue) on the ball in the half-space. Schmelzer’s (red) position gives Hummels all the time in the world when the ball gets switched, as seen below in the build-up for the first goal.

Sokratis with the ball, Gündogan to his right and Hummels far away on the left.

The central positioning of the four attackers in general and Aubameyang in particular pushes Gladbach down the pitch.

The ball is transferred across to Hummels who plays a fantastic pass through to Kagawa, who is in an excellent position in between opposition players. As the ball is played in, Reus’ intelligence takes over as he instantly will make the run that sees him getting the ball to score the opener. 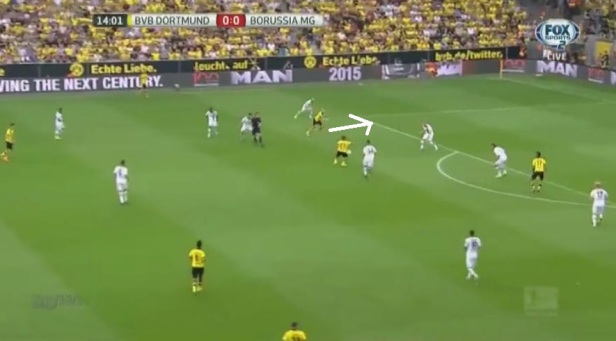 Kagawa plays a brilliant first time pass for Reus who controls and then scores.

The excellent movement of Shinji Kagawa, Mkhitaryan and Reus is also a hugely successful feature of Tuchel’s side. The Japanese playmaker never really made it at Manchester United but he has shown that when given the trust from his manager to play in a central position that he is an extremely talented footballer. His role is very differing as mentioned earlier as he drifts between a more central midfield position and one as the number 10. He intelligently finds space both in between the lines of the oppositions midfield and defence, and by drifting wide. The three are very flexibel and all find themselves constantly changing positions. This suits someone like Marco Reus, one of the best forwards around, who won’t be marked out of the game as easily as if he was just playing wide. They all are also willing to run in behind, even though Aubameyang is the main man for that with his explosive pace.

Kagawa finds space in between the defence and midfield. Again, look at the fantastic width given by the full-backs which allows the attacking midfielders to play centrally to combine and create.

Marco Reus drifting in from the right to find a pocket to receive the pass from Weigl in.

Although the Gladbach team here is extremely tight, There is an opportunity to find both Kagawa and Mkhitaryan with passes here.

This is a probably not a surprise as Aubameyang is one of the quickest strikers around, but his main role is to stretch the opposition. With the three creators all mainly wanting to get on the ball centrally, the striker runs in-behind constantly.His pace make opposition defences drop off an extra five yards, which gives the midfielders the space to play in as the following pictures will illustrate.

Here, with Weigl on the ball, the Ingolstadt is way to deep. There’s lots of space to run into for Gündogan when the ball is played into Aubameyang’s feet and then it just takes a simple wall pass to set the lightning-quick striker on his way towards goal.

Weigl on the ball again and look at the massive space left by the centre-backs because of their fear of Aubameyang’s pace. Thankfully for Gladbach, their midfield is very tight horizontally which makes the pass from Weigl to Kagawa (white) almost impossible. It’s easy to see though the benefits of a player with that quickness and what him playing on the shoulder of the defenders mean for the rest of his team in order to get the creative players on the ball in dangerous positions.

Dortmund’s start has been very impressive and it’s no surprise given the obvious work put into the system on the training pitch over countless hours in pre-season. New signing Julian Weigl has been highly impressive and the returning Hummels and Gündogan look revitalised and refreshed. They look absolutely scintillating going forward, and have kept clean sheets in both games so far. Even if they probably won’t have enough to challenge Bayern all the way for the Bundesliga title, they will be fascinating to watch and I can’t wait for Tuchel’s tactical battles with Guardiola. I will leave you with this overview of Tuchel’s system below. 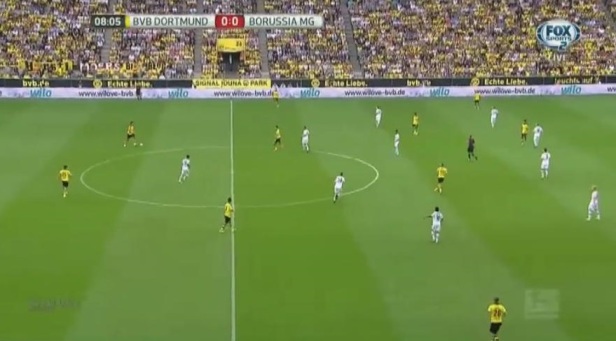 All players in the frame, and players giving width, finding space and stretching the opposition.