Fiorentina have had an indifferent season so far and came into this game on the back of successive defeats against Genoa and Lazio. Napoli on the other hand came to Florence with three straight wins having scored thirteen goals in the process. Dries Mertens had been responsible for six of those goals, and he scored again at the Artemio Franchi. However, the star of the show was Fiorentina’s homegrown star Federico Bernardeschi.

Both teams fielded their normal shapes, with Fiorentina adopting a 4-4-2 when defending which changed into a 3-4-2-1 when attacking. We wrote about their innovative tactics last year, and they continue in the same way with slight changes in personnel. Napoli fielded their normal 4-3-3 with Dries Mertens as a false nine in an attacking trident with Lorenzo Insigne and José Callejon in a centred attack.

Napoli dominated the first half and Insigne opened the scoring with a sensational strike from distance. Fiorentina came back strong in the second half with Bernardeschi inspiring the home side and midfield duo Matias Vecino and Milan Badelj winning control in the centre and young winger Federico Chiesa causing all kinds of trouble for Faouzi Ghoulam on Fiorentina’s right flank. Bernardeschi scored the equaliser from a deflected free kick in the beginning of the second half as Fiorentina gained the upper hand in an end to end contest. Mertens pounced on a Nenad Tomovic mistake though, and Napoli were 2-1 up. A minute later, Bernardeschi stepped forward remarkably as he ran about 20 yards with the ball before unleashing a powerful strike which left Pepe Reina without a chance. Bernardeschi would then set up Mauro Zaraté’s strike to hand Fiorentina a 3-2 lead with a glorious pass. A thrilling second half ended when Mertens was brought down by a needless Carlos Salcedo challenge which gave Manolo Gabbiadini the chance to equalise with his 94th minute penalty. He did, and it was literally the last kick of a fantastic match.

Last year was Bernardeschi’s first as a regular in the Fiorentina first team, but this season he has emerged as the key man for Paulo Sousa’s side and he has already scored nine goals and made two assists in only 16 starts for the club. He has outshone the likes of Josip Ilicic, Khouma Babacar and Nikola Kalinic (eight goals, still having a decent season) with his performances and is now a superstar i Florence and in Serie A. We profiled him last year and how he had then proved himself to be a universal player after excelling at left-back, left and right wing-back, as a winger on both sides and as a trequartista. This term he has mainly been used as one of the two attacking midfielders, the fantasisti, behind Kalinic. He has freedom to roam and express himself and he has been managed brilliantly by Sousa. The last year has seen Bernardeschi establish himself in the national team squad and as one of the best attackers in Serie A, largely thanks to the trust put in him by his coach.

Let’s take a look at how Bernardeschi showcased his football intelligence with clever movement combined with his excellent technique, vision, shooting ability and passing range to destabilise the visitors from Napoli. 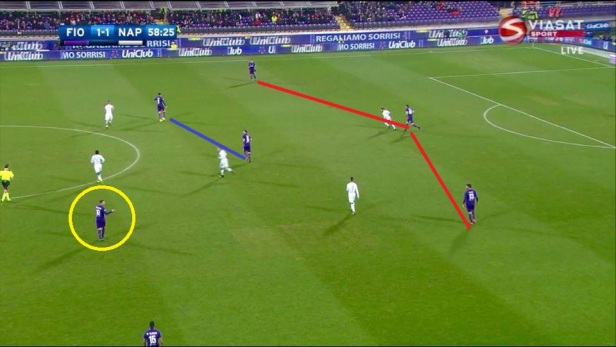 Fiorentina’s basic shape when building from the back. Three centre-backs, the two centre midfielders and Bernardeschi (yellow) as one of the two attacking midfielders looking to exploit space between Napoli’s defensive and midfield lines. 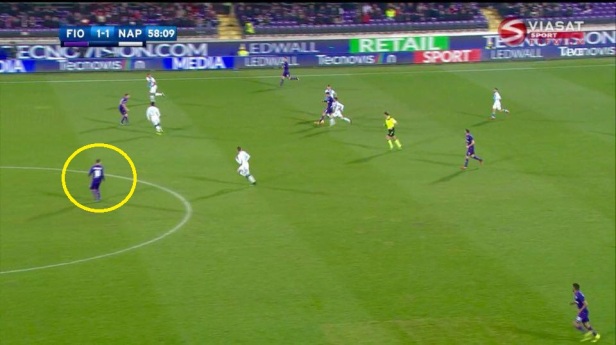 Bernardeschi excels at finding space from where he can hurt the opposition, and are preferably looking for central space behind Napoli’s midfield. Napoli’s aggressive pressing in midfield meant there was space to exploit behind Zielinski, Diawara and Hamsik which Bernardeschi could exploit.

As you see in the video above, for Fiorentina and Bernadeschi’s second goal of the night, the young Italian founds space behind Zielinski and Diawara, turns, and runs at the Napoli defence. He then uses his impressive shooting ability to fire past Reina. Great goal.

If central access wasn’t available though, Bernardeschi drops in back into the left half space where he normally starts from. From here he’s got an excellent view of the field and thanks to his passing range he can easily connect with teammates as he did for Zaraté’s brilliant goal.

Another brilliant goal for the home side as Bernardeschi’s lofted pass from the left half space is volleyed in by Zaraté. The quality of the pass and the finish is absolutely top class. Watch the goal here. 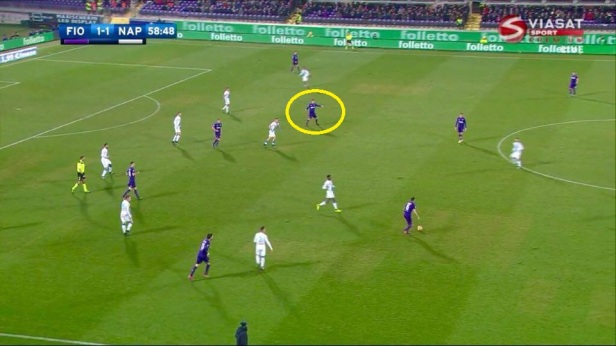 Sousa has given his creative fulcrum the freedom to roam the pitch to found space from where he can create, as can be seen above with Bernardeschi now in the right half space calling for the goal. 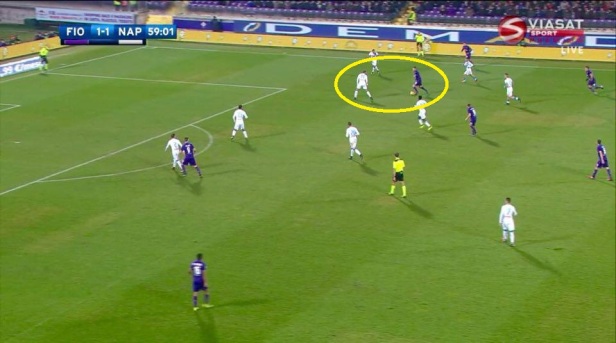 Here he isolates Maksimovic and can run at the Serbian defender. The play ends with a blocked shot that led to a corner, but Bernardeschi once again hurted Napoli with his movement and ability. 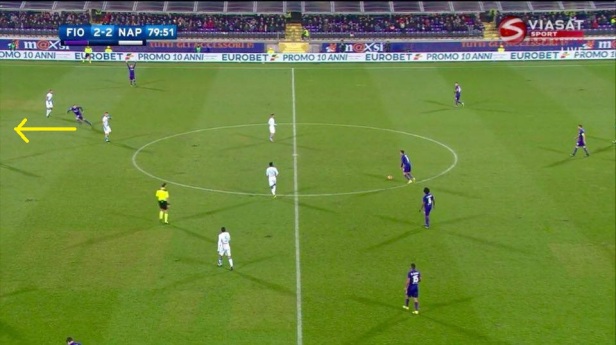 Bernardeschi is also comfortable running in behind defences, as can be seen here with Vecino on the ball and looking forward. There’s limited space in midfield so Bernardeschi tries to exploit the space behind Napoli’s high defensive line. Unfortunately the pass from Vecino was too short and Maksimovic could head the ball clear.

Going forward, there’s intense pressure on coach Paulo Sousa, but Fiorentina’s performance last night merited much more for the home side. Quite frankly they should have won the game, and Sousa can’t be held accountable for Tomovic failing to control an easy pass which left Mertens through or Salcedo’s stupid last minute tackle in a moment when Fiorentina had the game under control. Fiorentina celebrate Christmas on the back of three winless games, but with the form of Bernardeschi and Kalinic lately they look well equipped to start adding points if they can wipe out the occasional problems at the back.

On an individual level, Bernardeschi has matured into a superstar in Serie A and it won’t be long until he’s a household name in all of Europe. Right now he’s Fiorentina’s best player and is key for any chances of a European push in the league and a challenge for the Europa League trophy come the spring. His intelligence and technical quality makes him a superb player and a huge talent who is really benefitting from Paulo Sousa’s expansive passing style at the Artemio Franchi.

Atalanta are back to winning ways after coming from behind to beat Empoli in Bergamo on Tuesday night. Levan Mchedlidze opened the scoring but a goal from Franck Kessie and stoppage time winner from Marco D’Alessandro meant Gasperini’s men earned a last gasp winner. Pun intended (sorry).

In another crazy game involving Sassuolo, Cagliari emerged as 4-3 winners at Stadio Sant’Elia in Sardinia. Incredibly, Sassuolo has now blown a two goal lead on three occasions this season in games they’ve gone on to lose. 3-1 up at Milan led to a 4-3 defeat and 2-0 up at Sampdoria with ten minutes remaining ended with a 3-2 loss. On Thursday, they went 3-1 up after goals from Claud Adjapong, Lorenzo Pellegrini and Francesco Acerbi following Marco Sau’s opener for the home side. Two minutes after the young midfielder Pellegrini had put the visitors ahead he tackled Davide Di Gennaro recklessly and was sent off. Still, Sassuolo added to the lead but fell apart in a short spell in the second half when Marco Borriello and a brace from Diego Farias changed the game and made sure Cagliari was rocking.

Roma continue to win at home, in fact they’ve won all home games thus far this season, after coming from behind to beat Chievo. Jonathan De Guzman gave the visitors the lead, but goals from Stephan El Shaarawy, Edin Dzeko and Diego Perotti gave Roma an important win ahead of the Christmas break.

Stefano Pioli is doing great work at Inter at the moment, and they’ve won four of their last five, including three in a row after an impressive 3-0 win at San Siro against the normally consistent Lazio. Ever Banega scored a stunning opener and two quick goals from talisman Mauro Icardi ensured Pioli gained a personal triumph against his former employers who sacked him last season.

Palermo finally won last week, and they came within a whisker of doing so again against fellow strugglers Pescara. Swedish forward Robin Quaison scored a wonderful solo goal to put the Sicilians ahead, but a last minute penalty from Cristiano Biraghi meant Pescara won a vital point.

Torino-Genoa promised to be a cracking game, but only one goal was scored between two energetic and aggressive teams at Olimpico. That goal was scored by Andrea Belotti for the home side, which leaves them in eight after (almost) half the season gone. Belotti is up to 13 in Serie A now, just one behind top scorer Icardi. Genoa are 12th, much lower than their performances suggest, but Ivan Juric needs his team to find some consistency to go on a run of good results.

Sampdoria and Udinese played out a goalless draw at Luigi Ferraris which means Luigi Del Neri’s Udine end the first half of the campaign in tenth. Remarkable achievement considering he came on board with the team struggling near the bottom. Sampdoria have blown hot and cold but should be safe and now have a platform to build from under Marco Giampaolo.

Player of the week

Federico Bernardeschi was outstanding for Fiorentina against Napoli, scoring twice and setting up La Viola’s third with a superb pass.

Coach of the week

Stefano Pioli deserves this weeks prize after leading his new Inter to an emphatic 3-0 win over his former employers Lazio. Pioli has manage to restore optimism for il nerazzurri.

Goal of the week

Faces competition from Bernardeschi and Insigne among others, but Mauro Zaraté’s strike for Fiorentina was something else. The whole move was world class; Bernardeschi’s lofted pass, Zaraté’s run and finally the volleyed strike from the Argentinian.

Note that the last two games above was moved due to Juventus and Milan’s participation in the Supercoppa Italiana. Milan emerged as winners on penalties, their first trophy in six years, and it’s surely more important for them than for Juve as Milan’s youngsters now have got a taste for winning.